If you were blessed enough to be one of the lucky ones that attended the 2007 Camp Wilderness in Park Rapids, MN, you will appreciate the title of this report. You will also fondly remember the mantra that became the theme and battle cry of all that were present at this year’s event. After each meal, the announcements were opened with a bit of gibberish and then followed by the "the magic words". The echoes of those words could be heard at any given time from anywhere on the grounds of the Camp Wilderness BSA Reservation as hunters, guides and staff members used them to express the esprit de corps brought by this year’s UFFDA gathering. What started out as a corny idea blossomed into a ritual that brought laughter, excitement and pride for our mission to everyone chanting the dirge. It was good! And so was the hunt. 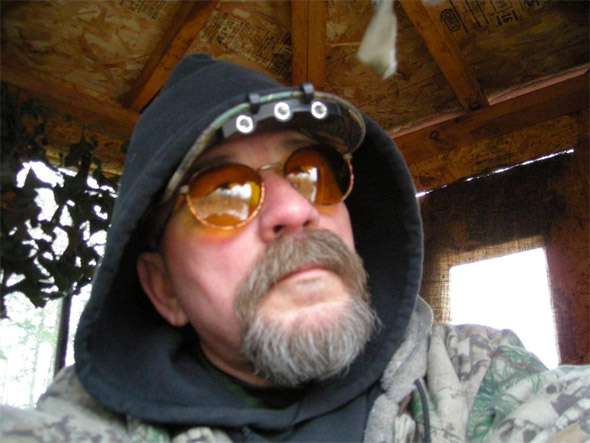 There were far too many highlights to cover in a short written report, however, there are some that were just too good to omit. One of the first highlights that comes to my mind was nothing short of an old fashioned, Biblical miracle. Leon Holmin, after four years as an UFFDA hunter, finally killed the first whitetail deer of his life! Yes, you read right – Leon Holmin is finally on the boards as a deer slayer. To make this historic event even more noteworthy, he took the largest buck that has ever been harvested at the Camp Wilderness hunt. What he deemed to be a 6-point buck turned out to be a handsome 10-pointer netting him a very worthy trophy as well as the "Big Buck" Knife Award, which is presented by Delaney Sports of Park Rapids to the hunter that takes the biggest buck at the annual event. Truth be known, we give a lot of the credit for Leon’s deer to Craig Rossman, Leon’s guide. Craig has some great, forested real estate that he has carefully managed to propagate exactly the kind of buck that Leon shot. It was a milestone for Leon, an accomplishment that was relished by everyone who was at this year’s hunt. We all congratulate Leon and Craig for making this miracle of miracles happen. Leon’s buck also earned him the #2 seat on the hunter roster for the 2008 Camp Wilderness hunt. 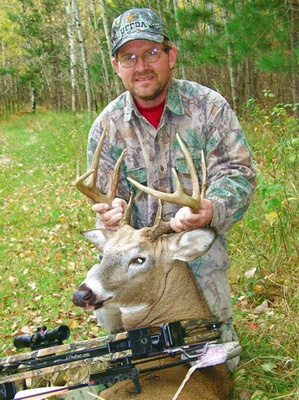 Richard Arndt of Mankato was also guided by Craig Rossman and turned the first night of the hunt into a freezer-stuffing experience by taking an antlerless deer. Dick flings arrows with a vertical bow and has done his part in year’s past by taking his fair share of whitetails on its last walk to the meat pole. It was one more animal and a very happy hunt for Mr. Arndt and number two for the 2007 event.

Big Mike Safcik from Wisconsin added another critter to the total by dropping a large doe on the first night of the hunt. Recovery didn’t happen until the next day, when the guides found his animal much closer to where it was shot than they had been looking the night before. Unable to find a blood trail, the guides were urged on by Mike’s insistence that it had been a good shot and that the deer was dead. He was right, of course, and was able to hang on to his perfect record as another UFFDA hunter that has never lost a deer. Mike’s guides, Justin Skidmore and Kyle Moe did an outstanding job of finding the animal without a blood trail once daylight lit the scene. Congrats to that entire team for being patient, persistent and getting the job done successfully. Big Mike’s Big Doe pushed the grand total up to three. 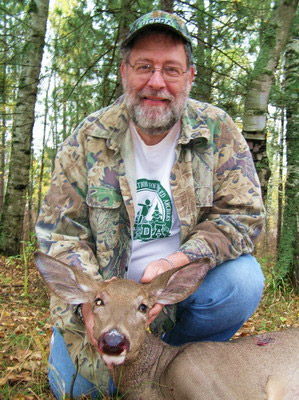 Terry Schwartz of Cass Lake, MN, who was a first-year hunter, took a deer under the capable tutelage of his guide Gary Schwartz, a first-year guide. These two were both new and they had the same name so they were teamed up and immediately labeled the Schwartz brothers, Terry and Gary. On the first night out, their conversation revealed that they were indeed related as cousins, not brothers. That interesting fact was shared with all, but did not change their title of "The Schwartz Brothers". Terry not only took his first UFFDA deer on the morning of second day, but he also went on to win the archery contest by slamming his arrow into the target the closest to the bullseye, while using a broadhead because he had no field tips with him. That feat earned him the next twelve months possession of the traveling trophy, which was graciously donated to the Camp Wilderness Hunt by Russ and Deby Kalk. It also won him the #1 spot on the hunter roster for the 2008 Camp Wilderness hunt (we want to make dang sure that trophy comes back next year). Congratulations to the Schwartz Brothers for a fine job on their first year out of the chute. 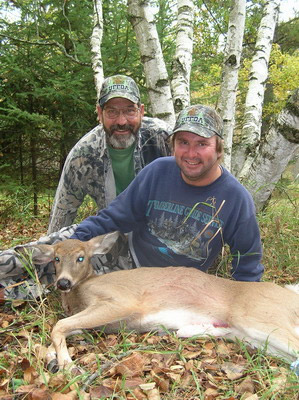 Let’s see! That’s four deer and that is what it looked like the total was going to be for the entire hunt, but we got a bonus in the ninth inning of the very last night. Neil Klimek of Starbuck, MN, a second year hunter came in from the field and swore that he had killed one deader than a mackerel. When told that we don’t count deer until they were hanging in the shed, he insisted that he had made a killing shot and that his tag would indeed be filled. His guides returned just after the banquet had been adjourned and all were heading for home. 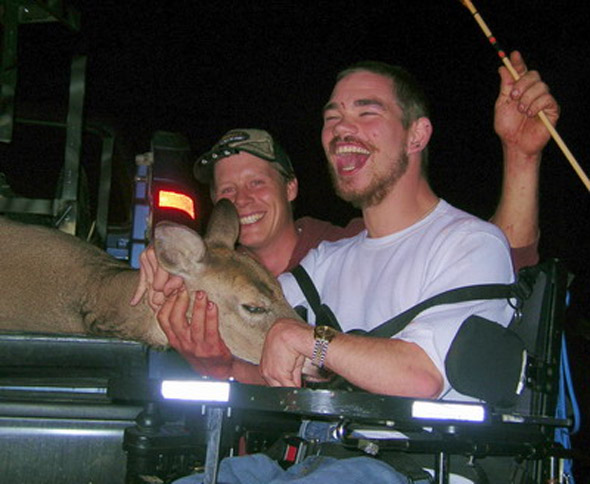 The last thing that they saw and heard as they moved towards the door was a very excited Neil Klimek shouting over and over again, "Yes! Yes! I knew it was dead!" And believe me, when Neil gets excited, its not easy to watch his exuberance and not be emotionally touched. As the evening ground down to a happy end, the ecstatic hunter wasn’t the only one that was wearing a big, toothy grin. This was Neil’s first UFFDA deer and the countless smiles of approval from his excitement and joy were a very good way to close the 2007 UFFDA Camp Wilderness Hunt.