Have I Got a Deer Tale For You!

Once again we eagerly waited for bow season to start. It had been a long hot summer and we were really hoping the weather would cool down. Well, the season opened, but the weather didn’t cooperate, as it stayed extremely hot. We agreed that Elroy would hunt in the morning and I would hunt with him in the afternoon, once it cooled down. Elroy was having fun watching the morning come alive in the woods. He had decided to wait for a big buck and leave the other deer for me. It was the first week in October when I was we were able to be comfortable in the blind in the afternoon and I was finally able to hunt. The first time we saw a doe with two small fawns. They were so cute together we decided to pass on them. Next time out we saw a doe with one fawn and just watched the deer again. Eventually we saw a doe by herself and took a shot. She moved and I must have shot a little high because my arrow went her behind her. For the next few times out, we didn’t see anything and I was beginning to feel a little bit down and out about missing my last shot and not seeing another deer. Then one evening, after we had been in the blind about an hour, we saw a deer as it came over the ridge in front of us. As it moved forward, I spied antlers and whispered to Elroy that it was a buck. The antlers started to get me a bit excited. I released the safety on my Excalibur Vixen crossbow, positioned myself to take a shot and waited…and waited...and waited. 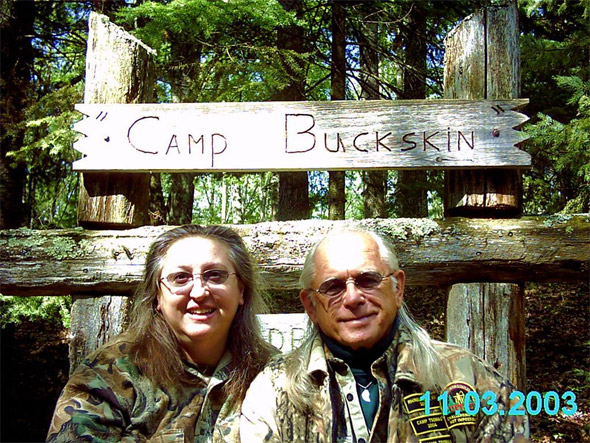 During this time entire time, which seemed like hours, the buck had been munching away much like a small boy with his food all over its mouth and face. The nonchalant animal was facing our blind making us a little bit edgy. Elroy had been sitting patiently by my side filming with our tiny movie camera. Now, of course, I had gotten my second wind so to speak and began to get ready for my shot. When the animal turned, I took careful aim and slowly squeezed the trigger of the Vixen releasing my arrow at the buck. For the first time ever, when Elroy asked if I saw where the arrow went, I could respond with a direct and honest "Yes!" The buck had jumped when I shot causing my shaft to bury itself so deeply into the lower part of the neck that I couldn’t see the fletching any more. The buck spun around and ran over the ridge to my right and we listened to hear it fall. I thought I had heard it crash into the brush, but Elroy wasn’t so sure. We waited for fifteen minutes until I finally pestered him into going to check for signs of blood. I was sure that there would be plenty and when we looked there certainly was. Since it was almost 6:15 p.m. we decided to wait till the morning to track the buck, as was our usual practice. In all the years Elroy has been hunting (40+ years), he has never lost a deer overnight and since I’ve been hunting with him he has reminded me of that repeatedly. Having a plan in place, we returned to the cottage and settled in for the night. Elroy went hunting in the morning and then began to track my deer. At first, he found a good blood trail so he came back to the cottage for some "bio-degradable tracking-tape" and me. Then we set out in pursuit of the deer, marking our trail as we went along, which allowed us to look back occasionally and estimate the path of the deer if we lost the blood trail. Elroy handed me the crossbow to hold while he made his way through a briar patch on his hands and knees. While he crawled, I was able to spot a way around the patch and met him on the other side. 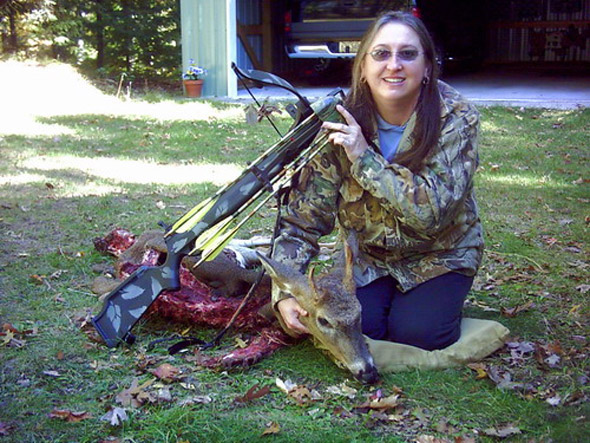 We tracked for a while more and came to another briar patch and repeated the process except while I was scanning for a way around, I heard Elroy cry out, "Oh, no!" He made a space for me to come into the patch by him and I entered and stood looking askance at him. He shook his head and said "I know I’ve told you before how safe it is to leave animals in the woods overnight and track them in the morning, but this time I was wrong and I’m sorry!" When I followed his gaze I saw why he had said what he did. There on the ground in front of us were the two front legs of the buck, completely detached from the animal’s shoulder blades. In a separate pile was the buck’s head, which was still attached to the spine and hindquarters, all of which was picked clean by whatever. The hide, which was still connected to the carcass by thin strip of skin, was in another pile next to the naked bones of the buck. As we gazed in amazement, Elroy questioned the consumption of so much meat, all the organs and even the intestines. With that thought and a step to the side, he had his answer as he narrowly avoided putting his foot into a pile of extremely fresh bear scat. That stinking’ pile of bear excrement was all that remained of the edible portions of my first four-point buck! We had been aware of the fact that there was a black bear sow with two cubs in the area as well as a boar had been spotted on a regular basis. I guess we had just involuntarily helped to fatten them up for the winter. And that is the latest news from Camp Buckskin where the bears are sleeping on a full stomach, thanks to you know who!